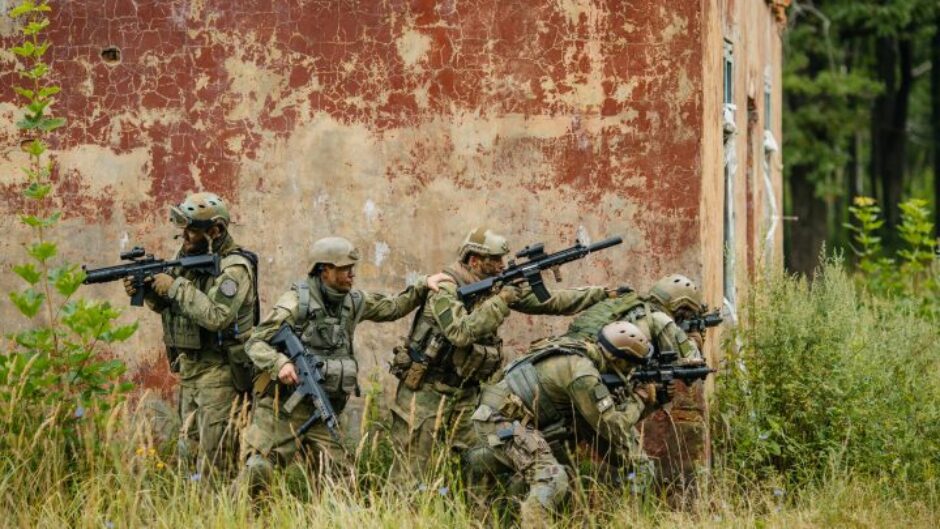 If you’re thinking about getting into airsoft, this guide will help you understand the basics about what you should expect when practicing airsoft.

Airsoft, its full name is airsoft skirmishing, is a combat simulation where teams are pitted against each other. They’re both outfitted with replica firearms that fire small plastic pellets, usually having a fire rate of around 15 BBs per second, and a muzzle velocity of 350 feet per second (commonly referred to as FPS).

You’re usually playing in a realistic area, with additional equipment, a mission, and special clothing. An important objective of airsoft is simulating being on a real battlefield.

Unlike similar sports (such as paintball) your monetary barrier to entry is relatively low. For example, you can invest thousands of dollars into a top of the line gun, or find something a little cheaper online to fit your needs. The bottom line is, you don’t need to be a millionaire to play and have a good time.

If you’re going to be shoot with little plastic pellets, it’s natural for you to be concerned for your health. In general, how painful a hit will depend on how far away it was shot from, as well as where you were shot at. If you’re hit at long range, you might not even notice the hit, but getting hit on exposed skin at point blank is going to hurt, and might even draw blood. Also, unlike paintball airsoft does not leave huge bruises, getting shot feels like getting hit with a rubber band. It hurts, but after a moment you won’t really notice it.

In general, airsoft organizers try to mitigate the risk, so, for the most part, you’ll have plenty of protection. Injuries in airsoft are less common than injuries in football. That does not mean there are no injuries, but this usually happens in a high-intensity game in dangerous terrain.

Do I need to be in shape?

Not really! Although being in shape and doing exercise will definitely help you out, you can still play at a high level no matter what happens. If you’re too tired, you can always just hang back and defend a position, and if you really need it you can drop out for a moment and wait in the safe zone.

So how do you play?

While the exact rules will vary depending on what the organizers say, there are usually certain rules that apply to everyone.

First off, getting shot means you’re “dead”. You need to be shot directly for it to count, having a pellet bounce off and hit you does not count. It doesn’t matter if it hit armor or skin, you’re still dead.

After getting “killed” you should raise your arms, shout “hit” and go back to your respawn point. You’ll usually come back to the game after a while, so you don’t need to worry about spending the entire day waiting. Sometimes there will be “medics” that can revive you, but that’s up to the organizer.

Another way of being killed is through booby traps or through airsoft grenades. These grenades detonate a blank cartridge, and if you’re in the radius of the trap you’re out. You’ll be informed of the radius beforehand by the organizers, but it’s usually around 3 meters.

In case you haven’t noticed, there’s little proof you’ve been shot. Because there’s little proof of you actually shooting someone, playing properly also means being honest about it and removing yourself from the game. There can be cheaters, but experienced players can usually tell when they’ve shot someone, so it’s easy to find them.

Welcome to my airsoft blog! My name is Jason and I created this to help newbies get into my favorite sport! I got my start in 2012 and have competed internationally, participated in large-scale milsim events, and constantly play at my local fields. Hope you enjoy the content and feel free to ask any questions you want answered!

Finding a Field Near You

Do you want to get started playing airsoft but aren’t sure how to find your local fields?